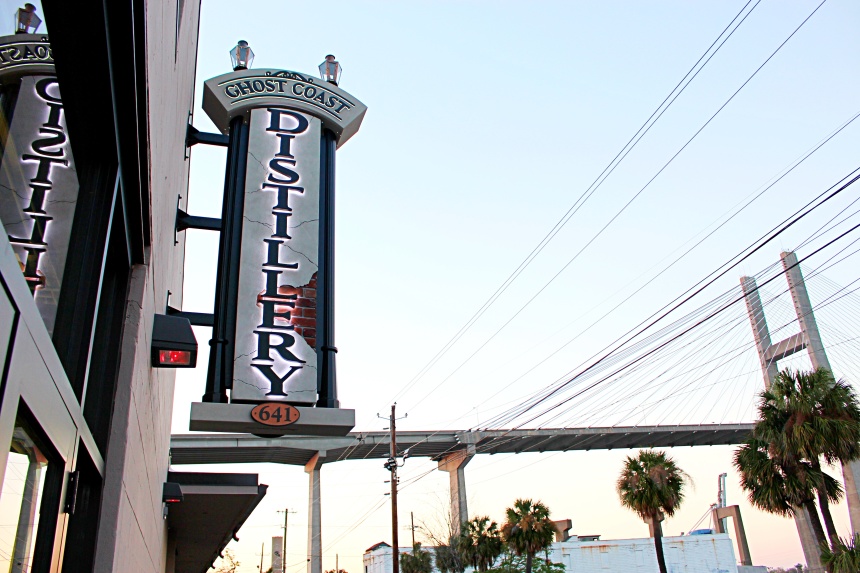 Savannah is the epitome of southern charm. From the grandiose shady oaks draped with Spanish moss to the iconic squares laden with rich history, our city is the destination of many travelers who seek to bask in its grandeur.

But on March 17th, people are not just coming to Savannah for its horse drawn carriages; they are coming to celebrate Saint Patrick’s Day. With that, Savannah gets to slip on her little green dress and show her guests a good time.

While visitors and locals parade in the streets, donning St. Paddy’s garb with a green beer in hand, one can not help but notice that there is a history lesson here.

This tale, though, is not necessarily that of Saint Patrick, the primary patron saint of Ireland, but of prohibition and revelry. For it is the repeal of Prohibition and the spirit of revelry that allows us all to celebrate Saint Patrick’s Day with such jubilant inebriation.

Revelry, my friend, is defined as lively and noisy festivities, especially those that involve drinking a large amount of alcohol.

The company whose slogan is “Born from Revelry” is none other than Ghost Coast Distillery, Savannah’s very first distillery since prohibition was lifted.

This tagline is in reference to General Oglethorpe’s ban on liquor in Georgia from 1734-1755. Once it was repealed, 21 long years later, Savannah never looked back.

Ghost Coast Distillery has been up and running for just over two months, producing craft vodka and bourbon in the heart of downtown Savannah. They just opened to the public for tours in mid-February.

Paying homage to Savannah’s haunted history and sandy coastlines, Ghost Coast seeks to celebrate Savannah in everything that they do.

“It is not about us, it is about Savannah,” Tony Bagnulo, director of marketing and sales, stresses. “We try to tell a story of Savannah with everything we launch.”

Take their craft vodka for example. Vodka 261 was named after the number of years between the end of the first prohibition in Georgia and this year, when the spirit was officially distributed to a variety of restaurants, bars and retail stores throughout the area.

Ghost Coast Distillery is also in the process of making and aging craft bourbon. Since this is a 3-year process, we will have to be patient in waiting for the product’s official launch date. In the meantime, Ghost Coast founders, Chris Sywassink and Rob Ingersoll, have opened the distillery’s doors to show the public how the bourbon and vodka are hand crafted and aged.

Given that Ghost Coast is not legally permitted to sell booze on the premises, they offer two different 45-minute tours, one that ends with a tasting ($12.50) and the another with a souvenir bottle of Vodka 261 ($32.00).

The 17,000 square foot distillery can be found on 641 Indian Street with the picturesque Talmadge Memorial Bridge just overhead.

The tour begins with a 9-minute video about the history of alcohol and prohibition as it relates to Savannah. The goal is to “celebrate Savannah as much as Ghost Coast.” The theater space seats about 40 people, utilizing 125-year-old refurbished church pews as seating.

The video presentation is not only displayed on three large screen televisions, but also covers all four walls, from floor to ceiling. The surround sound and video immerses viewers into the story, making for a captivating history lesson.

Next, patrons will be shown a space that is built to hold 900 barrels of bourbon. Ghost Coast makes an average of one barrel of bourbon per day.

Again, this is good and bad news. The reality is that it takes 3 years to age bourbon, and as a new company, Ghost Coast is only a few months into this process.

“There is only so much we can do. Now we wait.”

Bourbon aging typically happens in the mid-west in Kentucky, where it is cold and summers are not nearly as hot. Since exposure to the climate is used in the aging process, the barrel room is not climate controlled.

Ghost Coast is banking on Savannah’s humid summers and salt water from the river to create a distinct and unique flavor.

Bourbon has to be stored in a new American white oak barrel that has been charred. It looks much like a burned log from a fire inside. The char adds color, flavor and removes impurities. Each barrel equates to about 200 bottles of bourbon, meaning that there will be plenty for everyone in a few years.

In the production area, visitors will learn how bourbon is created. A mash bill is the mix of grains used to make bourbon. These grains are cooked and fermented to begin the bourbon making process. A typical bourbon mash bill is corn, malted barley and rye.

But Ghost Coast is doing a completely different take, involving two different mash bills, that will age separately and then, when the aging process is complete, will be blended together.

The first mash bill will have corn, malted barley, oats and wheat. The second will swap out wheat for rye. Oats are used for sweetness, the wheat will provide a “approachable and pleasant” flavor, and the rye will be a bold punch. 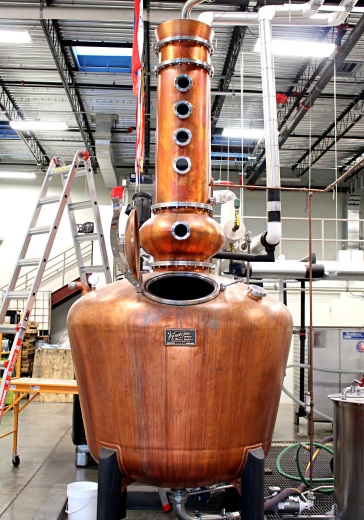 The distillery guests will be introduced to the “heart of the operation”, the 500-gallon handcrafted Vendome copper pot still. This stunning work of art was custom-made in Kentucky and was purchased long before the Ghost Coast building. Both the vodka and bourbon are crafted in this still, giving both distinct flavor profiles.

The tour ends in a rustic bar designed as an event space. Patrons can rent the space for parties and gatherings, but must first procure a catering license and special events permit.

The tasting portion of the tour involves a ½ ounce sample of Vodka 261 and two mini cocktails. 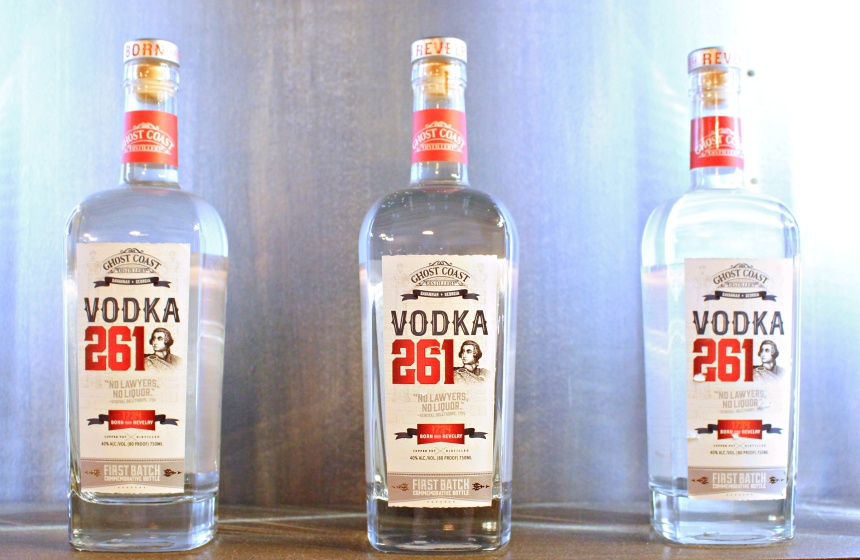 Made from 50% corn and 50% wheat, Vodka 261 is multi-distilled and triple filtered, giving it an “old European-style” essence. This spirit is made to be odorless, colorless and tasteless with a soft and sweet finish.

Following a shot of straight vodka, the bartender will demonstrate how to incorporate Vodka 261 into a Ghost Coast Gimlet and Oglethorpe’s Mule. The Gimlet is made with Vodka 261, lime juice and simple syrup.

The Moscow Mule, which I learned is “the drink that brought vodka to America”, is typically made with ginger beer, lime juice and vodka. Ghost Coast’s variation incorporates house-made ginger syrup with fresh ginger, peppercorns, sugar and water. They also use club soda to cut through the zippy ginger flavor.

Ghost Coast will soon be releasing a Vodka 261 Orange, as a tribute to the 1734 Trustee’s Garden, which grew a “sweet, delicately tart version of orange”.

Sywassink, Bagnulo, Ingersoll and staff have all adopted Savannah as their home. Ghost Coast was conceived from a desire to start a local business in this city.

“What better way to celebrate Savannah than open a distillery downtown?” Bagnulo asks.

So on Saint Patrick’s Day, when you are engaging in festive revelry, keep Vodka 261 in mind. Bars and pubs like Molly Macpherson’s, The Cotton Exchange, Alleycat Lounge, El-Rocko, Mellow Mushroom, 1790, Six Pence, Crystal Beer Parlor, Churchill’s, Molly McGuire’s and many more, sell this locally made craft spirit. Cheers and bottoms up!