It’s still the first month of the New Year, so I would assume that, like me, you are watching what you eat. Last month was filled with carbo-loading, creamy dairy products (think egg nog), sugar-laden sweets and gluttonous overeating. If you are anything like me, your body needs a break. It needs a cure. I’ve…

If you’re anything like me, fresh hand-cut fries are your jam. They are crispy on the outside and tender on the inside. Teenie tings of salt and bright earthy parsley (with a dab of ketchup) are all these babies need. The best part? No soaking and no fancy frying equipment. All you need is a…

Each new year, I decide to start over with eating healthy. Like everyone else, I eat like a man over the holidays and my pants don’t fit by the New Year. It doesn’t matter how badly I want to get back in shape, I still have major cravings for naughty food. Pizza is always and…

Like we do each and every January, the Hubs and I have been doing a cleanse {diet} to lose those extra holiday pounds. Since last year, we have really liked the Eat to Live concept, where eating vegan/vegetarian is best for our health. Yes, yes, we love meat with all our hearts. So eating straight fruits and vegetables has been a major challenge. For this January, we decided to {once in a while} add a tad bit of animal by-products {eggs, yogurt and sour cream} to our diet. This has made it a little bit easier.

Have you ever eaten so much junk food that is grosses you out? After you eat it, you swear that you will never eat it again. Well, it’s funny because now that I am eating vegan/vegetarian again, I am craving pizza and burgers so hard. It’s the grass is always greener effect.

Winter squash is such a cozy and satisfying health food. Since it’s difficult to find comfort food that is healthy, I made a point to share this recipe with you!

Savannah has been cold. Yes, I know it’s nothing like PA or NY, but 38 degrees in the morning is chilly for this southern city! Everyone is overreacting.

We searched three different stores for fire wood, but they were all out! So we went to ACE Hardware. The girl told me there was one bundle left. She escorted me to the spot, but all that was left was the price and bark pieces from the wood. We searched around and tucked behind a different display was a red burlap bag filled with wood. It looked like someone hid it for later.

I ran out to the car and jumped in, “Drive, Drive! It’s like the Apocalypse out there!”

And that is how we got the last bundle of wood on the coldest weekend in Savannah. #drama

So we lit a crackling fire and warmed up the oven for this comfy cozy meal. This dinner comes together easily. I toasted the walnuts on the stove top while the Brussel sprouts and acorn squash roasted in the oven. Then right before serving, I wilted the spinach leaves.

It seems like the most stunning part of this meal is the golden and charred skin on both the sprouts and squash. I also love how the squash becomes its own bowl because bowls are the epitome of comfort {to me}.

All this to say, when the meal came together, the food photographer in me grabbed the camera and took these shots. It was getting dark outside and the Hubs was getting hungry, but a photo op is a photo op.

Ready for the recipe? 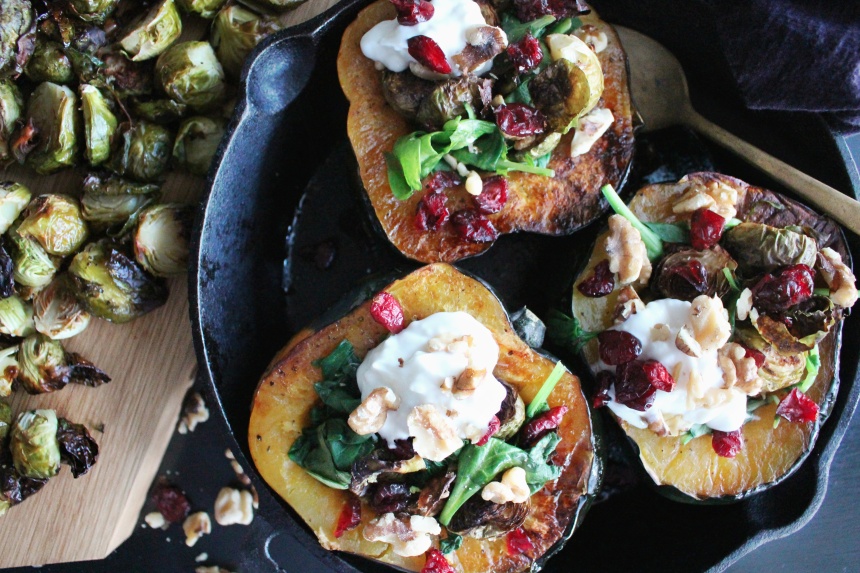 2017 is #theyearofvegan. Oh, veganism. Plant based eating has been gaining traction over the last few years. While the first modern day vegans coined the term in the 1900’s, it seems like eating vegan food has become mainstreamed, and dare I say, trendy. People who identify as vegan choose to not consume or utilize anything…

An essentially raw bowl of Asian flavored comfort? Sign me up! This skinny version has Summer written all over it. The light and refreshing natural sweetness of the watermelon counterbalances the nutty and salty flavor of the Tahini Soy Sauce. Each cube of raw tuna offers a meaty bite, while the avocado caters your taste…

It’s a weeknight and you want to make a unique meal with a flavorful punch, but refuse to spend forever in the kitchen. Fast food may be fast, but it lacks health benefits and leaves you feeling lousy about your decision. So, if you like it spicy, hearty and healthy, this is the meal you…

*Note: Many followers reported these measurements were off, causing the pancakes to not hold their form. I have made adjustments to the recipe in 2019. Let me know your thoughts in the comments!-Maria* These Vegan {egg-less & dairy free} Pancakes topped with Fresh Berry Coulis are not only healthy, but deliciously hearty. These yummy hotcakes…

So what’s up with this colorful veg-loaded {vegan} skinny corn chowder? Does it taste as good as it looks? Hell yes, because I made it. This gorgeous {healthy} summer soup is packed with veggies that only enhance the flavor. A bowl of this skinny corn chowder will fill you up without the extra calories from…

Sangria. You can’t go wrong. It’s hot out and you want a sexy drink to match your bikini. Everyone wants a drink that is low maintenance, boozy and dazzling, especially when sharing it with friends. Sangria. So here’s the deal. It’s an easy and fantastic drink that is slightly tangy from the citrus and grapefruit,…

Vegan. This has been my identity for 3.5 weeks now. Here’s the thing, I like fried chicken, mac & cheese and meatballs. But the husband and I have been participating in the 6-week Eat to Live challenge. This diet involves NO oil, NO sugar, NO salt, NO meat and NO animal by-products. The goal is…

the story For just about 3 weeks, the husband and I have been doing Dr. Joel Fuhrman’s Eat to Live (click) 6-week plan. Dr. Fuhrman’s book reviews nutrient-dense foods and explains how (and why) we can (and should) break ourselves from food addiction, while losing weight. As avid gluttons and foodies, the husband and I…