Plant based eating has been gaining traction over the last few years. While the first modern day vegans coined the term in the 1900’s, it seems like eating vegan food has become mainstreamed, and dare I say, trendy.

People who identify as vegan choose to not consume or utilize anything that derives from animal products and by-products such as meat, eggs, dairy, honey, or leather. Some make this choice based on its health benefits, while others may have ethical or environmental reasons.

It seems like now, more than ever, the food scene is catering to this type of fare. There are hyper-realistic veggie burgers that actually bleed and nutritional yeast that legitimately taste like cheese.

Chefs have been creatively concocting dishes that make Meatless Mondays something to get excited about, and all-vegan restaurants have been popping up like mushrooms. PETA says that 2017 is #theyearofvegan.

While part-time vegans may be on the rise, legitimate vegans, like Chef Shawn Harrison, aim to disseminate this fare to the city of Savannah, making it accessible for all. The Charlotte, N.C., native moved to Savannah with his wife, Krystal, in March after falling in love with the city.

“Veganism and vegetarianism are on the verge of exploding in Savannah,” Harrison predicts.

Harrison owns and operates an all-vegan pop-up dining series “Tephra” (tef-ruh) that was originally based in Charlotte. Tephra, named after the solid matter, such as dust and ash, which are ejected into the air by an erupting volcano represents “newness” to Harrison.

“To me, tephra is violent. Some may have pre-conceived notions about veganism and changing someone’s mind is violent. I want to form new terrain, new ground, new thoughts, newness.”

Harrison’s ambition goes beyond his passion to serve elevated vegan cuisine, it concentrates on “breaking out of old dogmas and perceptions, in an attempt to show people that veganism is not an exclusive lifestyle.”

As an 18-year-old, he found himself on a “spiritual journey” where he chose veganism for its health benefits of the body and mind. Commenting on his world-view, Harrison stated, “If you are ingesting negative suffering energy, I firmly believe that you are a magnet for that kind of energy.”

Harrison’s culinary background progressed humbly, from a server, dishwasher and prep cook to chef. He worked in about 30 different restaurants in the Charlotte area, some that were featured on the show “Diners, Drive-Ins and Dives” and others that were high-end establishments.

He gleaned from those experiences and used the methods learned in his vegan cookery. 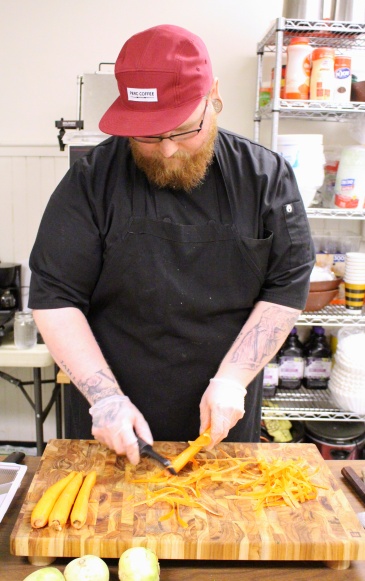 As someone who’s been a vegan for seven years, Harrison has been dedicated to extending vegan cuisine to his Tephra patrons at a variety of locations.

The spontaneity and anticipation of a pop-up restaurant is appealing to many. As a foodie, there is certainly something uniquely thrilling about attending a private dinner made exclusively for a select few.

The location is forever changing, as is the menu, and the date of the next pop-up is a mystery.

Prior to moving to Savannah, Harrison hosted a few Tephra pop-ups at Foxy Loxy Café, one of which was a faux Chicken and Waffle brunch.

Now that he resides in Savannah, Harrison seeks to offer Tephra pop-ups regularly in different spaces, collaborating with other chefs.

On April 14, Harrison served a four-course, BYOB, plant-based dinner at Bryson Hall for 21 guests. There were a few setbacks, including a late start to the dinner and the original location canceling a week prior.

The meal was innovative, consisting of vegan delights that featured local produce from the Farmer’s Market.

The cream was simple yet decadent, consisting of soaked cashews, lime, lemon and salted blended until velvety smooth.

The final sweet course was comprised of an olive oil and fennel shortbread cookie with raw cacao date avocado mousse and was embellished with candied blood orange peel.

“My style is slow. It involves extracting flavors no matter how long it takes and no matter how much work it takes,” Harrison acknowledges.

The doughnuts are yeasted with unbleached flour, utilizing applesauce in place of eggs. They are primed with coconut oil and frosted with a mixture of confectioners’ sugar and almond milk.

In the meantime, Harrison is living by faith. He and Krystal made the move to Savannah as a first step in their journey and now are anxiously waiting to see what opportunities arise.