THE Savannah food scene has certainly transformed over the years. Chefs are introducing modern takes on Southern classics and diversifying the city’s repertoire.

However, it’s not just the new restaurants that are making changes, some that have been here for decades have shifted with the times as well.

Savannah Rum Runners Bakery and Café (click for website) has been owned and operated by Meggan Hartley, Ohio native, since 2010.

Named after the smugglers during the Prohibition era, this bakery was established in 1997 out of a small space on Wilmington Island. It was there that the previous owners served only one kind of traditional Rum cake.

From hotel service to five-star restaurants, Sullivan University Culinary Arts graduate, Hartley, gained valuable experiences in a variety of settings. In 2005, when Hartley’s parents moved to Savannah, they stumbled upon an opportunity to commandeer the Savannah Rum Runners Bakery.

Shortly after, they convinced their daughter to not only become a baker, but a bakery owner as well.

With only a culinary background, Hartley, a novice baker, sought training from the Rum Runner’s previous owners, who willingly shared their valuable secret recipes and techniques.

The bakery was first relocated to Habersham Village for only two years. Then, in 2012, moved again to their “final destination,” in the Victorian District, on the corner of West Bolton Street and Montgomery Street.

Hartley explains, “The reason for the move was I wanted to evolve with times. I did not want to just be a bakery. I wanted to actually use my degree.”

With that, the Bakery was expanded and a Café was added, serving PERC espresso, artisan sandwiches on freshly baked bread, house-made soups and hearty salads.

Yet the innovative and inspired Hartley did not stop there. Heeding to the “alcohol theme,” she enhanced the original rum cake recipe to a different level, infusing baked goods with liquors like vodka and Kahlua and beers like Yuengling.

This neighborhood Bakery and Café stands among homes, in a stately teal Victorian house trimmed in white.

Outside, those who pass by will find a quaint back yard patio, with the Café’s herb garden mounted on the exterior of a house. Tables and chairs are set up in this charming space, between two buildings, giving customers a place to breathe the fresh air while sampling the Café’s bounty.

Inside, sitting at one of the three bistro tables, sits a blushing bride-to-be, surrounded by family, enthusiastically designing her wedding cake with Hartley’s mom. As part owner, her mother seeks to help Hartley out when she is not working her full-time job.

At another table, placed snugly beside a bay window and highlighted by beams of sunlight, sit two college-aged girls, sipping seasonal lattes and checking social media.

A few feet away a middle-aged gentleman selects a personal quiche from a glass display case filled with daily made cakes, breads, and other confections. 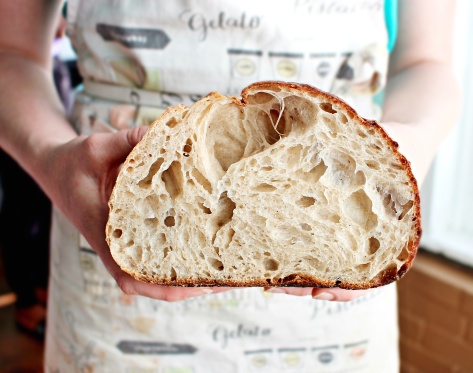 Behind this case of goodies is the remaining two-thirds of the Bakery and Café, the kitchen. There you can find Hartley designing cakes and employee Katie Bryant crafting loafs of bread.

From Focaccia to Challah and Buttercrust to Sourdough, Bryant bakes fresh bread daily, sold by the loaf. They also star in the Café’s gourmet sandwiches.

Take the Cuban for example. This robust sandwich is served on their French loaf, made with lard instead of butter, giving it moist and supple mouth feel. Although the Cuban’s bread is divine, the pulled pork and house-brined pickles seal the deal.

The meat is rubbed with special spices including cocoa powder and slow-cooked until fork tender for 14-hours. The pickles are brined in rum; yes, you read that correctly, giving them a sweet but snappy flavor that contrasts the rich meat.

All of this, combined with salty ham, Swiss cheese, and Dijon mustard, is pressed between warm slices of Bryant’s fresh bread. You will not want to share.

Another sandwich worth noting is the Monte Cristo, made with rum-battered Challah bread. Warm ham, turkey and melted Swiss cheese are sandwiched between two pieces of this egg-rich bread, which is prepared like French toast. The sandwich is then garnished with powdered sugar and served with raspberry preserves, balancing the savory elements of the dish.

If lunch is not what you are after, the Café offers handcrafted coffees as well. While there, we savored the seasonal flavors of salted caramel and raspberry coconut lattes, both of which were bold and comforting.

You cannot leave without trying the pièce de résistance, the Rum Cake. It can be bought in the full size or miniature version. The dessert’s light and airy texture pleasantly contradicted the bundt cake’s traditional dense quality. Hartley explained she substitutes half of the water with half alcohol to ensure this consistency.

Savannah Rum Runners Café and Bakery has been serving our city for about 20 years. The staff is dedicated to catering to customer’s needs, accommodating budgets and wish lists. This is the reason why some original customers, from the first shop, still frequent the current bakery and café.

Nevertheless, Hartley has dedicated herself to grow with Savannah’s food scene, while maintaining the integrity of the original bakery. They also serve patrons at the Farmer’s Market and plan on diving into the Food Truck revolution.

Hartley’s commitment to the future, while honoring the past, makes it almost a certainty that this Savannah delight will be here another 20 years.