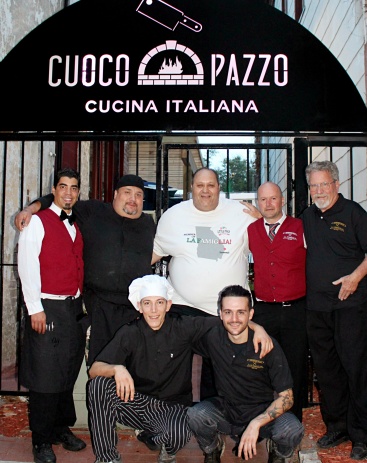 WHEN DINING in the Deep South, one can expect to partake in those comforting classics like fried chicken, collard greens and buttermilk biscuits. However, one does not presume to find authentic Italian food in this region; it seems paradoxical, absurd really.

As an Italian-American New Yorker, I know firsthand what Italian food should taste like. My Grandma, Theresa, was born and raised in Sicily, Italy.

She may have spoken broken English, but her food spoke declarations of love and passion. I spent my whole life in the kitchen with Grandma, making homemade pasta, sauce, meatballs and more. Given my Italian heritage, I can absolutely differentiate between imitation and genuine Italian cuisine.

Last year at this time, my husband and I dined at Little Italy on Wilmington Island. To test authenticity, I ordered a side of sauce and meatballs, doused in Parmigiano-Reggiano cheese, of course.

One bite and I called over the waiter, who spoke little English, “This tastes just like my Grandma’s,” I shouted unnecessarily loud.

In just 17 months, the La Famiglia Restaurant Group has introduced Savannah to five authentic Italian restaurants, each one embraced by Savannahians, transplants and visitors alike.

Naples Italy native, and owner of each restaurant, Gary Langevin, operates several restaurants along the coastlines of South Carolina and Georgia.

Little Italy was Langevin’s first Savannah restaurant, which was followed by Bella Napoli on E. State Street, La Dolce Vita on Tybee, and Terra Mia in Pooler. Now, as of November 4, Langevin’s newest brainchild, Cuoco Pazzo, is open for business on Abercorn Street.

This new Cucina Italiana—Italian kitchen—is housed in the former Leoci’s Trattoria building. With a complete floor to ceiling renovation, the only thing Cuoco Pazzo has in common with its former tenant is the genre of cuisine.

The long anticipated Cuoco Pazzo was projected to open in mid-April, but with a few setbacks, including city approval, they were able to muster up a soft opening just in time for the Rock ‘n’ Roll Marathon.

“All good things come to those who wait,” Langevin positively recites.

Langevin’s innate love for the food he serves and people he feeds was ingrained at a young age. His mother, Josie, owned a restaurant in Naples, Italy, for 12 years. Langevin and his siblings developed their strong work ethic through the most unglamorous of jobs, washing dishes. Consequently, his mother’s passion and initiative inspired Langevin to be the restaurateur he is today.

When Langevin grew up, he ventured to America, spending 24 years in Charleston. While there he opened many Neapolitan restaurants, one of which is still run by his sister. Then after spending an unfruitful year in Hilton Head, Langevin came to Savannah.

“I came here thinking I would go back to Charleston. But a friend of mine, who owns a couple of pizza shops, convinced me to look around.”

In Langevin’s quest to find quality Italian food in Savannah, he ironically dined at Leoci’s.

It was ultimately determined that there was a “need for Italian food” in Savannah. Thus, Langevin began building his Neapolitan empire in the Hostess City of the South.

As a loyal friend and family member, Langevin invited about 20 Neapolitans, from his home city, to join him on these restaurant ventures. His goal was for them to decide if Savannah was the right fit for them. “I wanted them to see my vision and how beautiful Savannah is.”

Although each restaurant is owned 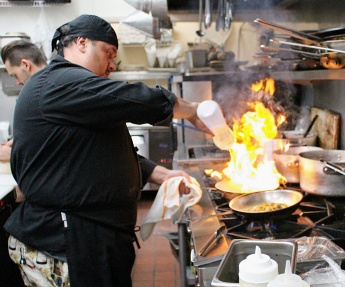 and operated by the same group, they individually have their “own chef, crew and personality.” Langevin reiterates, “If it’s the same name, you’re going to expect the same thing. But it’s not the same.”

This exact notion goes for Cuoco Pazzo, whose originality and uniqueness derive from one man, Chef Rosario Limonio.

Langevin pointed to Chef Rosario and boldly declared, “That guy is an artist. He has golden hands and can work magic with food.”

Chef Rosario grew up in the same city as Langevin and has been in the states for about 20 years. Spending most of his career in Orlando and New York City, the chef came to Savannah only 6 months ago, in order to bring Cuoco Pazzo to life.

Chef Rosario was given free reign of the kitchen and menu at Cuoco Pazzo. Langevin told him, “You have white paper. Do what you want and express yourself. Be an artist. Make your creations.”

Langevin seems to truly understand what successful leadership looks like. “There will be no passion or flavor in the food if I tell him what to do.”

He vows that all of his Neapolitan chefs have the opportunity to showcase their abilities without the threat of micromanagement.

It is evident that Chef Rosario is not only passionate about the food he creates, but highly skilled as well. From brick oven pizza to fresh ravioli, everything is made in house.

When I arrived, Italian staff members and Chef Rosario warmly greeted me. He ushered me to the kitchen, where a pot of sauce and meatballs sat on the stovetop, evoking emotional memories of Grandma.

Plates of artfully composed Italian food came out, one by one. First up was the wood-fired brick-oven margarita pizza. Its crust was thin, golden and blistered from the searing heat of the oven. It was topped with fresh tomato sauce, house made mozzarella, torn basil from the Chef’s garden, and extra virgin olive oil.

After this, a bowl of “Pappardelle alla Norcina” was served. These hand made noodles are very broad and flat, like ribbons. They were coated in a creamy walnut cognac sauce and tossed with imported salty pancetta and earthy wild mushrooms. This dish was light and decadent at the same time.

Chef also served his stunning Tuna Positano special, which featured two beautiful medallions of fresh Tuna with perfectly seared grill marks. Homemade asparagus ravioli accompanied the fish, along with seasonal sautéed vegetables and a nest of fried spaghetti. Each component was thoughtful in presentation and robust in flavor.

Lastly, I noshed on the Smoked Salmon Salad of fresh spring mix, onions, yellow tomatoes, avocado, and Gorgonzola cheese, all lightly tossed in a lemon dressing. The most satisfying aspect of this dish was that the salad was elegantly wrapped in slices of salted smoked salmon.

As for the new space, Cuoco Pazzo’s renovation will be fully completed soon. When it is ready, the front door will be sealed off and guests will walk through a side entrance, which bears a black “Cuoco Pazzo” sign that illuminates at night.

A short walkway, bordered by Chef Rosario’s herb garden planters, will escort them to the back patio. Eventually this unfinished outdoor space will be a bustling wrap-around screened-in deck.

A pinnacle feature both on the patio and inside the kitchen is the brick oven. Made in the image of Emeril Lagasse’s oven, this statement piece was built, brick by brick, into the wall.

While patrons feast, Chef Rosario can be seen sautéing specials through the new open kitchen layout.

While Cuoco Pazzo is still in their soft opening phase, to “work out the kinks,” the La Famiglia Group has proven they have a knack for bringing Naples to Savannah. “For us its all about the experience.” 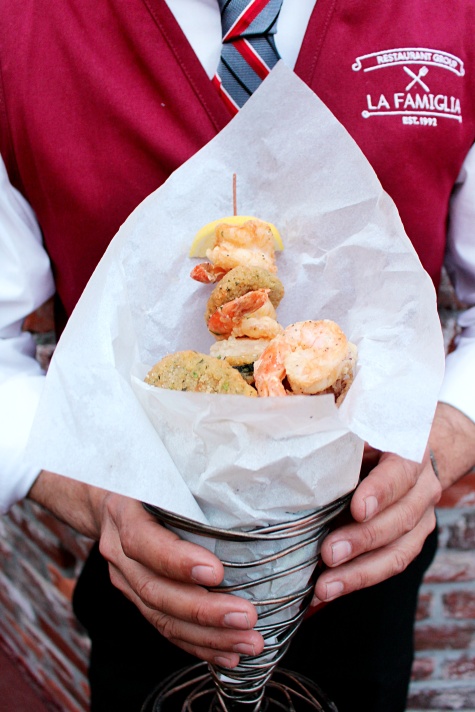