These are the representative Deep South staples that visitors expect from our city.

However, anyone who has spent enough time in Savannah would add pho, ramen noodles, spicy Korean BBQ tacos, duck dumplings and sushi to that list.

The Ele and the Chef restaurant collection have been disseminating Asian fusion across Savannah for about ten years.

Ele Tran and Chef Sean have become icons in the Savannah food scene, owning and operating several restaurants in the Savannah and Charleston areas. Ele and the Chef’s Asian dynasty evolved from humble beginnings, when the twosome traveled to Savannah to open their first Vietnamese eatery named Little Saigon on Wilmington Island.

Over the years, the restaurant collection has expanded to include Ele FINE Fusion, Chive Seabar & Lounge, Flying Monk Noodle Bar, The Vault Kitchen & Market, Fire Street Food, and The King and I.

Suffice to say, Ele Tran and Chef Sean have not only dominated the Asian food scene in Savannah, they have perpetually exceeded expectations in restaurant design and flavor profiles.

Now, they are at it again.

Since 2009, Ele FINE Fusion was Wilmington Island’s fine-dining destination. Given its high price point, upscale dining alcoves and dinner-only menu, it seemed like Ele FINE Fusion was typecast for a select audience. While Ele FINE Fusion had regulars seeking a sushi fix, a majority of Islanders and Savannahians kept it on their special occasion list.

With all that being said, Ele Tran and Chef Sean decided it was time for a change. Following a 4-month long renovation, Ele FINE Fusion was redefined as Current Kitchen & Cocktails. 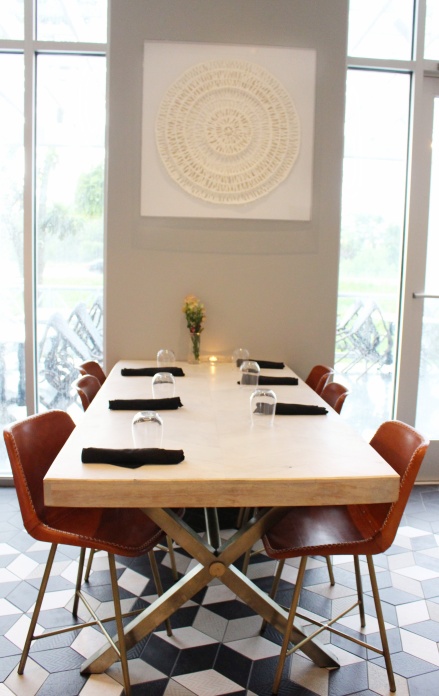 Current, which opened in early July 2017, embodies the breezy coastal atmosphere that the Islands exude while maintaining the trendy-chic charisma that all Ele and the Chef’s restaurants have.

As parents, Ele Tran and Chef Sean wanted to transform Ele FINE Fusion into an upbeat family-friendly eatery, serving as a spontaneous social hotspot. The ultimate objective was to design a space that was more snazzy than most Island bars and grills, but laid-back enough to stop in on the way to the beach.

Inside, a refreshed version of the former sushi bar remains on the left of the front entryway and bar seating, with the back wall removed, remains on the right.

Diners can choose to go left and dine in one of the intimate glassed-in partitions, each with only a few tables and high-backed booths. This area is dubbed as the sophisticated side, as it was a special feature in Ele FINE Fusion and was revamped to fit Current’s theme.

On the right, Current’s newly renovated space boasts a modernized open concept dining area and bar. This vivacious side of the restaurant is studded with marble tables, golden lamps, and eclectic black, white and grey tiled flooring, all enclosed by floor to ceiling windows.

A newfangled bar adorned in scalloped marble accompanies the vivid space. The tri-sided bar can also be accessed by those waiting in the front lobby and those eating outside on the veranda.

In just a month, Current has been busier than expected, opening for lunch on weekdays at 11 a.m. and 12 p.m. on weekends in addition to dinner at 5 p.m. seven days a week.

While Ele Tran designed the new space, Chef Sean revamped Current’s menu so that it catered to everyone. Keeping with the casual coastal motif, the wide-ranging menu offers starters, sushi, a raw bar, salads, sandwiches, entrees, a kid’s menu and desserts. The affordable price-point conveys approachability and encourages family-style sharing.

Chef Sean incorporated a few favorite dishes from his other restaurants and added some novel offerings that are exclusive to the new joint. The Turmeric Mussels, for example, are a crowdpleaser from Chive Seabar & Lounge.

The mussels were served in a clay pot, bathed in a creamy yellow sauce infused with turmeric, yellow curry, white wine, fennel, garlic and onion. The effervescent broth was both light and indulgent, matching the mussels’ subtle sweetness.

Another seafood starter that embodied seaside cuisine was the spicy tuna tartare. Ample knobs of avocado and raw sushi tuna, mixed with masago, were molded on a bed of vibrant green seaweed. This salad was crowned with flash-fried crabsticks and served with drizzles of poké sauce and spicy mayonnaise.

While sandwiches like the Lemon-Dill Salmon Burger and Seared Beef & Goat Cheese grace the menu, a Vietnamese delight that is only offered at Current are the Bánh Mì Sliders. Two snack-sized buns are piled with roasted pork, sriracha, pickled vegetables, jalapeno, daikon, cucumber, and cilantro. These petite sliders, served with parmesan fries, harmoniously pack a punch of sweet, spicy and briny notes.

Current’s dinner entrees are categorized by sea, grill, and land. From the sea, menu items range from simple staples like fish tacos to complex compositions like Sri Lankan fish curry.

From the grill, pork belly, tenderloin, tofu, salmon and chicken cater to all palates.

By the land, comforting noodle bowls like the Ramen Bowl or Current House Noodle are similar to those found at the Flying Monk.

In order to bolster a sense of community, Current offers a “Current Summer Nights” pig roast every Saturday outside on the front porch. This laid-back and relaxed family night is filled with live music, bonfires, and Chef Sean roasting a whole pig on a spit. 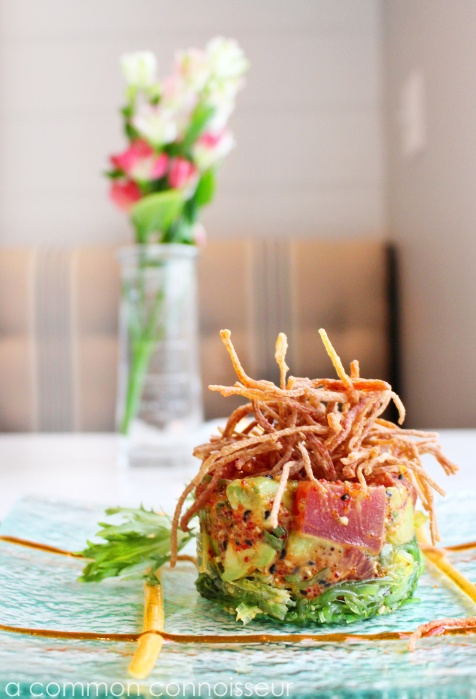 Ele FINE Fusion’s era may have ended, but Current Kitchen & Cocktails has resurrected its purpose of providing Asian fusion fare accessible to all. It’s a place that jibes with the Island vibe, while standing out for all the right reasons.

As can be expected, The Ele and the Chef restaurant collection have more in store for Savannah. Coming to downtown this fall is the Little Duck Diner, a classic family-style diner serving breakfast, lunch and dinner with an Asian fusion twist.